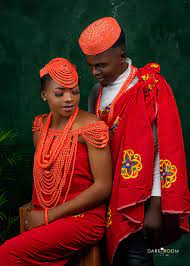 Throughout Africa, the people’s affinity for flamboyance and luxury lifestyle is unparalleled. There can be little doubt that the two words that are now so prevalent in the Nigerian social atmosphere are derived from that region: “Aso-Ebi” and “Owambe.”.

A traditional Asooke wedding is mainly performed in their traditional attire for an engagement party or wedding. Fabrics were initially found in that region of the world but are now available worldwide. As time goes on, this fantastic fabric has evolved into more and more styles. This guide is all about Yoruba traditional wedding attire in detail.

It is exciting to see how Yoruba wedding traditions are reflected in the modern wedding ceremony through traditional clothing. The way Yoruba weddings are usually conducted starts with choosing an appropriate fabric known as Aso-Oke, which can be reused for future Yoruba wedding attire.

The Aso-Oke fabric is used to weave Yoruba native clothing from natural materials. Threads are either made of cotton or cotton dyes and are woven manually.

There is an official fabric known as Aso-Oke used by the Yoruba. There was a time when it was the only fabric used for special occasions, but that has changed dramatically over the years. In addition to Aso-oke, other fabrics such as Ankara, Damask, and other fabrics are also trendy, but Aso-oke will always be the most popular.

There are certain traditions in Yoruba land regarding how brides get dressed. There is a requirement that each of them wear unique clothing from head to toe. Usually, the costumes consist of a traditional wrapper, blouse, and headpiece.

An Iro wrapper is used to wrap things. Usually, these wraps are tied around the bride’s waist and cover her hips, legs, and ankles until the floor is reached. Nowadays, it’s possible to choose a fabric that creates beautiful folds and creases, making it look extremely feminine and elegant.

In addition to the Iro wrapper, a blouse is often worn. The blouse is usually made with the same fabric and color as the wrapper. There is something particularly festive and attractive about white lace blouses.

Headpieces like this one are made out of a headline called Gele. This traditional Yoruba headpiece can be fashioned into many different shapes and forms to enhance creativity and elegance. The most common material used for headlines is Aso Oke. There are times when brides attach small veils to their Geles.

This type of wedding attire usually accompanies some fashionable jewelry. Brides most often wear an earring and a bracelet. In most cases, brides wear beads that are specifically designed for weddings. Beads like these are commonly worn with attire that matches the color or contrasts it.

As a rule, Yoruba and grooms wear Sokoto pants (loose pants), Buba shirts, and Agbadas (a cape-like garment). Special occasions like weddings and other formal events call for wearing an agbada. Intricate and exquisite embroidery can be seen on the chest of the Agbada.

Traditionally, the attire is paired with a hat called a Fila. Filas can be of different types, and often the groom chooses what type of Fila he will wear. It is customary for the groom’s Fila and Agbada to be made from the same fabric as their bride’s Gele, although some couples may have different fabrics.

Grooms also wear some jewelry. A long and elaborate beaded necklace would be the only jewelry a man would wear if he did not have permanent items like piercings. Additionally, some grooms wear a horse’s tail called Irukere as accessories. The traditional item has been used for centuries, and many grooms still decide to keep it today.

By whom Yoruba traditional wedding is funded?

Whenever gold is in its heyday, its popularity is at its peak. It is time for you to get some details about these colors, which is why it is highly recommended. Blue with golden accessories will feel good on men, while black with gold accessories will create a luxurious look for ladies.

It is a relatively new trend but has already gained quite a bit of popularity. Nigerian couples prefer colors such as these since they look simple but very stylish simultaneously. In addition, it can be paired with various sparkles to make your design stand out.

3.    A combination of orange and gold

It is also quite popular to use these two colors. Gold accessories are a popular choice as families wish to emphasize their wealth during the occasion and look festive.

4.    A combination of burgundy and white

While this combination might sound the same as our first one, it is different from it. It gives the wedding ceremony and reception a different look thanks to the deeper color of burgundy.

5.    The combination of red and white

Colors like this go with various patterns because they are a classic combination. This combination is also effortless to find, which is why it is so famous or popular with couples. The colors in this wedding theme are a little similar to those used in Western weddings.

What is the traditional dress of Yoruba brides?

A traditional Yoruba wedding typically consists of a woman wearing iron and Buba, a colorful wrapper and top outfit frequently embellished with beads, a veil, and an apple shoulder scarf. In addition to carrying a fan, they tie a gentle (an ornate head covering).

In what way do Yoruba traditional weddings take place?

As part of a traditional Yoruba marriage, the groom’s family usually arrives at the wedding location. The groom’s families will have to arrive early or pay a fine if they don’t. Therefore, the groom will dance with his friends and prostrate twice with himself and once alone with them.

Do the Yoruba people pay the bride price?

There is only a five thousand naira price for a Yoruba bride in most Yoruba regions and states. As explained above, this is how it works. We are not asking for money in exchange for this amount. It is only for representational purposes. To emphasize this point, some parents (of brides) give their money back to the groom.