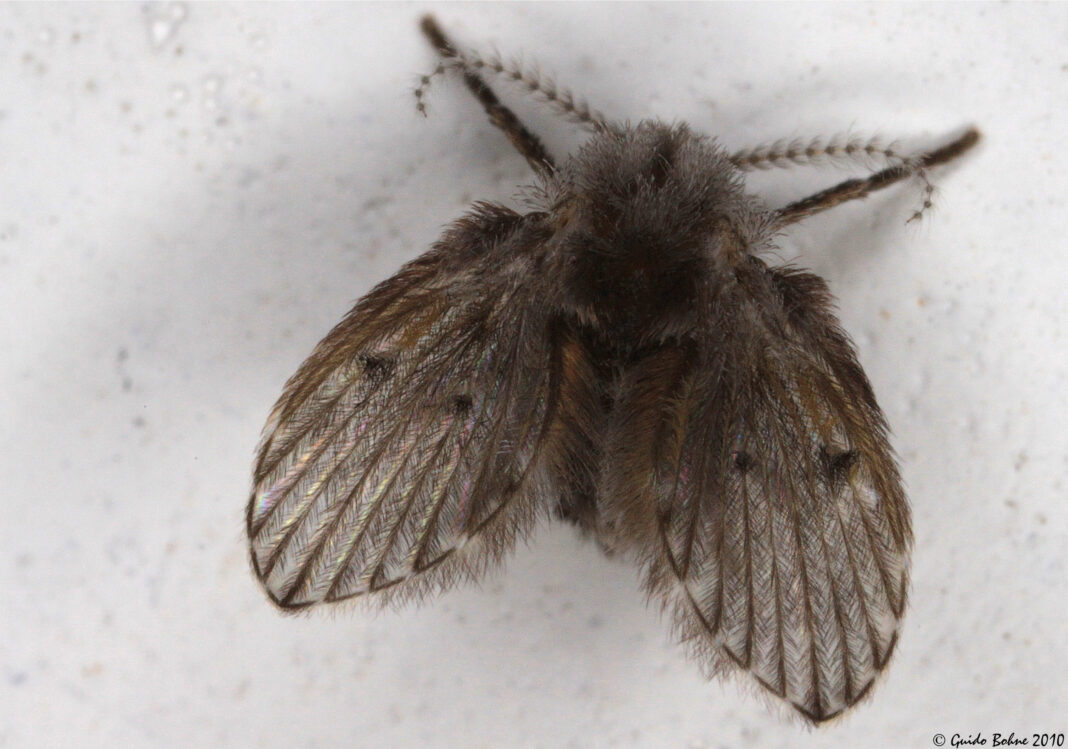 You may encounter several different types of flies in your home, so it’s helpful to know how to tell them apart. Despite their fuzzy-looking wings and weak flight, drain flies have a distinctive appearance. Their flight is limited to short, hopping bursts, and they are not very fast. A moth fly is sometimes called a moth fly because of their similar physical characteristics. Here is a breakdown of the traits that identify the drain fly:

What Are Drain Flies?

Moth flies and sink flies are two typical nicknames for drain flies. They range in size from 2mm to 5mm, the same as gnats and fruit flies, but may be identified by their tiny, moth-like wings and rounded, fuzzy bodies. As opposed to other little house flies, drain flies have a different hue that usually ranges from pale grey to black. Although they resemble moths, these little organisms cannot fly very far. You’ll note that they don’t swarm around your house as other pests do; instead, they move around by making broad jumps.

Since drain flies may lay and hatch up to 300 eggs in just 48 hours and have a lifetime of eight to 24 days, it’s critical to take action before the problem spreads through your pipes.

They spend the next 9 to 15 days in the larval stage feeding and developing before emerging as adults after 20 to 40 hours in the pupal stage. Temperature and other environmental factors can play a significant role in the life cycle. It can take as little as eight days or as long as 24 days. With the addition of flower nectar, adults eat the same organic material as larvae.

Both homes and commercial properties can be infested by Drain flies – even sewage treatment plants. Under air conditioners, they are sometimes seen in commercial buildings. After being away from your home for some time, when the water has been standing for some time, you’re more likely to find drain flies in your home. As long as you resume normal activities after the drain fly problem resolves after the water starts to flow again, the issue is likely to settle. However, in the case of many drain flies, this might not be possible. However, drain flies aren’t limited to being found after periods of being away from your home. These fuzzy tiny flies can also be found in your home even when you’re not on vacation. Drain flies can also be found in the following areas around your house:

Drain flies: Are they harmful?

Drain flies don’t carry diseases or pose a threat to your family or home. In addition to being gross and a nuisance, they also drown in the bottle of wine you forgot to cork last night by the dozens. When you let your drain fly problem go untreated for a while, and they increase, they can spread their nests throughout your home, costing you a plumber’s visit.

How do you know if you have a drain fly infestation?

Unless you have an abundance of fruit and vegetables in your home, your tiny flies probably drain flies rather than gnats or fruit flies. If your drain is clogged, cover it with clear packing tape overnight to determine the severity of the problem. After the flies have hopped out of the gutter, they will stick to the tape, and your level of discomfort with the results will determine what your next course of action should be.

Getting rid of drain flies

You usually have to get rid of drain flies and their larvae after you’ve identified them positively and decided that the problem doesn’t seem to be going away on its own.

You may want to clean your drains now if you haven’t done so for a while. To remove any gunk in and around the drain, use a scrub brush and a natural cleaner. Repeat every day for a few days pouring a large pot of boiling water down the drain.

If you are persistent, you may not need any other drain fly treatments beyond the natural ones. You should call a pest control specialist if you need to ramp up the fight rather than using store-bought insecticides or other chemicals to treat your home. Professionals use effective and more targeted chemicals, but they also use them sparingly – unlike many homeowners who have been known to pour a gallon of devastatingly toxic commercial drain cleaner down their sink in an attempt to kill a single roach.

The best thing to do is run to the store for vinegar instead of bleach, which, although it will kill drain gnats, is a solid environmental pollutant. Before pouring bleach down the drain, dilute 1 part of it in 10 parts water.

Combine half a cup of salt with half a cup of baking soda, plus an equal amount of white vinegar. The next day, flush the drain with hot or boiling water after it has worked its magic overnight. As a result, the drain will be sanitized and the flies and eggs will be killed.

When they smell organic matter they need to breed, drain flies are attracted to drains from outdoors rather than from pipes and drains.

A drain fly problem will usually resolve itself on its own nine times out of ten.

A Comprehensive Guide About Affordable Heating And Cooling

Boiler VS. Water Heater: All The Interesting Information You Need To...